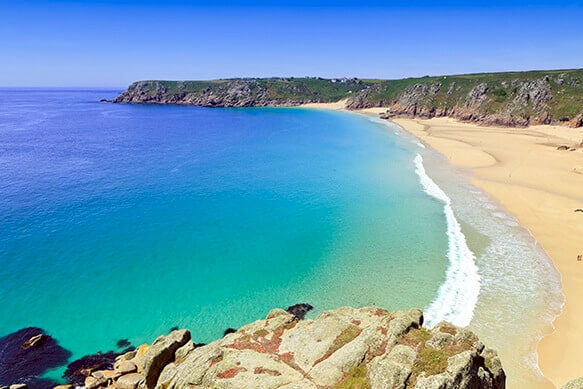 10 of the Most Beautiful Places to Visit in Cornwall

It is the thinnest part of England chewed and rutted by glaciers and erosion; a jagged sea-cloaked peninsula sprayed with brine tidings of the deep. Regal headlands are crowned with miniature prairies, that in summer blush with heather, and gild with corn marigolds. Green lanes, like rabbit warrens wend and twist down, and down to sleepy crab pot fishing villages and vanish into vast swathes of icing-sugar sand. Everywhere is coast, and the architecture of the sea; natural beauty stripped back to purity; hulking cliffs and haggard stacks.

Cornwall is a place where the sublime is felt truly, and wholly.

But where to go? There’s a great deal of Cornwall to explore. With somewhere so innately beautiful it’s easy to turn up and get choice paralysis.

At Hotel Penzance, to make it easier for you, we’ve picked some of the most beautiful places for you to visit on your Cornwall adventure. See below. 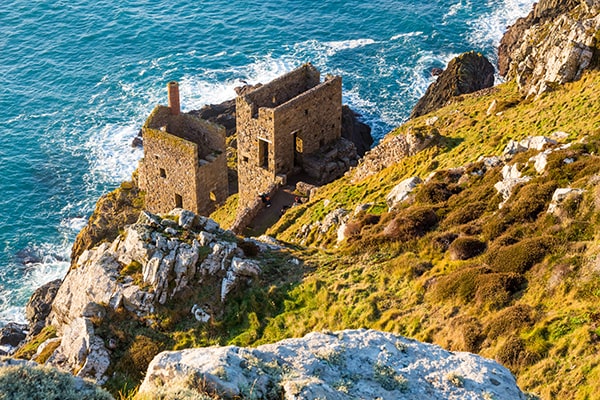 What a photogenic mine you have Ross. If you’ve seen the new BBC adaptation of Winston Graham’s Poldark you’ll be no stranger to Botallack. Abandoned on rough cliffs on the North Cornwall coast, this stone legacy is even more entrancing in real life. It stands alone, enduring the broiling tempests cast up by the wild celtic sea and serves as a reminder of Cornwall’s proud mining heritage.

Yes, more Poldark. This is Ross and Demelza’s beach, known as Nampara on TV—and what a beach it is. Not far the world famous cliffside theatre, the Minack, Porthcurno is a lovely spot. Walking barefoot over the smooth honey sands, as aquamarine waters ripple in the bay is trancendental. The shores of your very own treasure island. Only, you can hop in your car and leave because it’s not an island—although you may not want to. 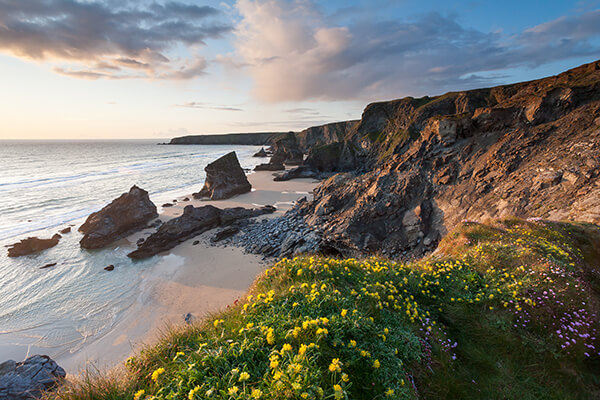 Easily one of the finest sea views to be found anywhere in the UK. The Bedruthan Steps are colossal stone spear heads, filed down and sharpened to slick points by the relentless gnawing of the tides, and thrashing of Atlantic storms. When the beach is eclipsed by swirling white tipped waves, the stacks here are a bridge over troubled water—for a giant no less. The Giant “Bedruthan”, a mysterious figure of Cornish lore. 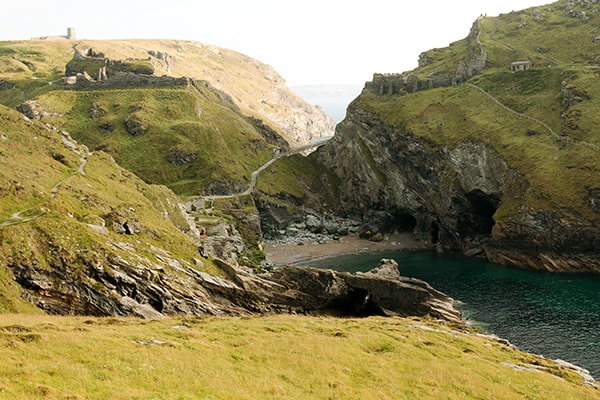 On a stark isle, broken from the main headland by a ravine sits the tumble-down ruins of Tintagel Castle. Arthurian legends are rife here, although the stories are not firm. It’s thought that King Arthur may have been conceived here. However, the debate to whether he existed is still ongoing. Nevertheless, Tintagel is as Instagrammable and dramatic as a castle can be, with far reaching blue vistas and a brooding atmosphere of legend. 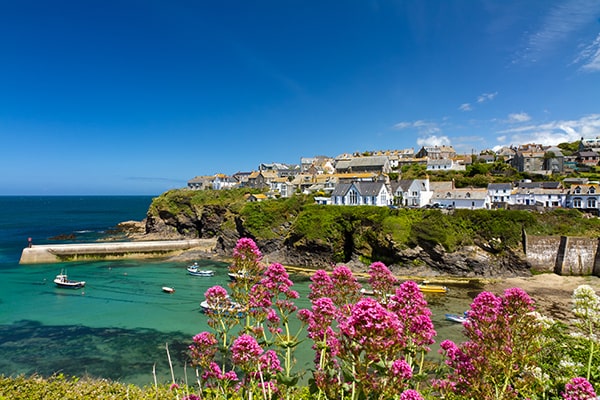 Port Issac is a small fishing village, made famous by three things: it’s the home of TV’s Doc Martin, the shanty belting Fisherman’s Friends, and Nathan Outlaw’s Michelin Starred seafood restaurant. What an achingly quaint place it is. Hole in the wall cottages spiral down to a match box harbour with a slice of beach, where in the summer at low tide, the Fisherman’s Friends sing acapella amongst drifts of bladder wrack and mermaid’s purses.

Sitting on the platt with a pint of local ale or a gin and tonic and listening to the hearty bellowing of South Australia as the sun melts into a watery horizon is something special—not least because it’s in Port Isaac. A magnificent place. 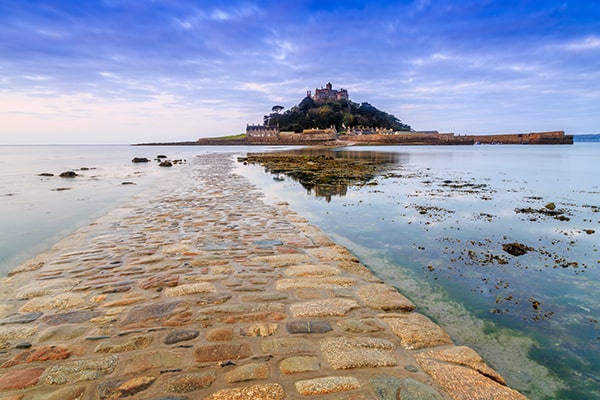 This is Mont-Saint-Michel’s understated, but still striking historic counterpart. Each is a tidal island, with a hard-edged medieval chapel at its summit, although in Cornwall the chapel is skirted by a thick band of verdant trees. Mount St Michael is much smaller than its French neighbour too.

When the tide is lapping over the copper tone causeway leading to St Michael’s Mount, you’ll be seeing visions of a faery isle. One risen from the ocean bed in a frothing tower, its illusive path being reclaimed by the waves once more. 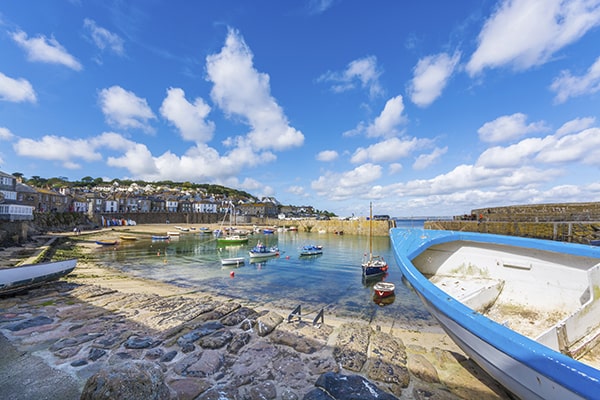 Once described by the Welsh poet and wordsmith Dylan Thomas, as the “loveliest” village in England—and he has a point. Like the name suggests Mousehole is a snug fishing village, with narrow streets, and huddling cottages, clustered around the harbour like spectators in an amphitheatre.

Mousehole is old. Of course, it has modernised with coffee, watering holes, and galleries—but it’s design was decided hundreds of years ago. It exudes an air of timelessness that’s often hard to find. It doesn’t get any more Cornish than this either. Dolly Pentreath, the last person to speak only the ancient Cornish language lived in Mousehole and sadly died a couple of centuries ago. 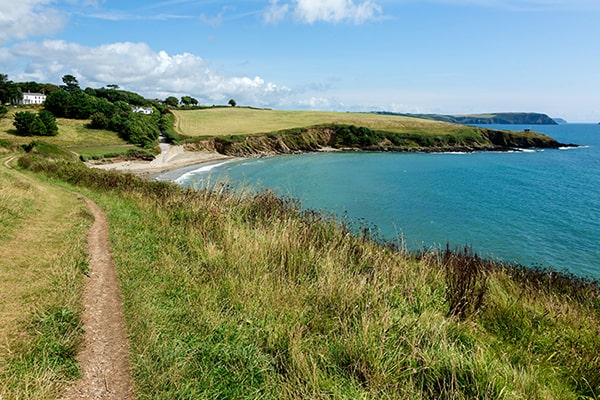 The Roseland is a remote peninsula flanked by the Carrick Roads, which are the estuarine meanderings of the River Fal, as it merges with the English Channel. It is considered one of the most secluded and pretty parts of Cornwall.

Its landscape rolls with patchwork hills, and along its shores are white gold beaches. St Just in Roseland’s riverside church, hiding in luxuriant verdure, with magnificent palm trees has a sultry, exotic feel in the summer and slightly surreal aura. Down the feverish rabbit hole. It’s a destination in Cornwall like no other. 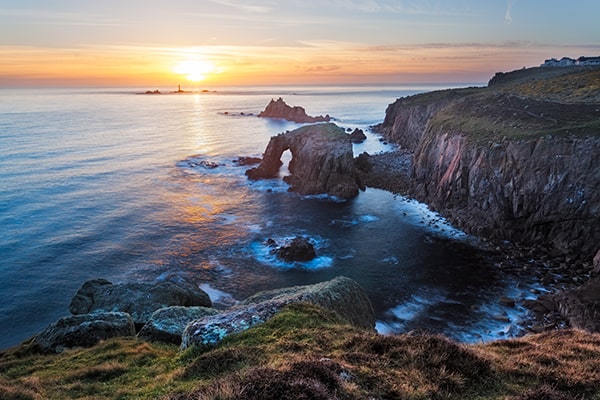 The feeling at Land’s End, when you gaze upon the Atlantic Ocean, like a saltwater desert going on and on until it fades to black at a ruler’s edge, is captivating. It’s not far removed from looking upwards into a starry night’s sky and the feeling insignificance come awe that it evokes.

Land’s End is truly the end of the land, where the South West peninsula stops. When you’re here it’s a strange sensation to have the entirety of England at your back, or before you—as if you’re getting ready to set sail to the New World or explore this isle you’ve happened across in the immense blueness. Perhaps the most striking time to visit Land’s End is at sunset, as the melting sun sends streams of ochre from the horizon over darkening swells. It’s inspirational.

Enjoyed reading? Why not check out our other blogs.

Following the latest Government guidance we will re-open our hotel and restaurant on Monday 17th May 2021 and are taking bookings with arrivals from this date onwards. You can book your Cornwall staycation via telephone, email or through our website. Read our relaxed cancellation policy here.

We would like to take this opportunity to thank you for your patience and understanding. From all the team at Hotel Penzance we very much look forward to welcoming you soon! Stay safe.